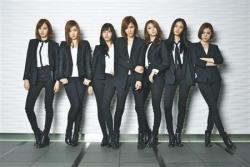 8 members girl group became a sensation after peaking 7th on weekly Oricon Chart, released just 4 months after Heaven from October last year. This solely proved the popularity of AfterSchool. Straight after that, they went on to release a new song ‘shh’ on Jan 29th. This interview was however, conducted without Uie.

Juyeon : I think we had received a really good responses and this has encourage us to have better strength and greater future activities in Japan.

I think this is also the results from th 2nd fan meeting held in Japan but did it managed to leave a good impression on fans?

Nana : Unnie have given so much support to AfterSchool even when we first debut in Japan. We have had held around 20 times of high touch fan meetings and I’m really happy if the fans actually appreciate it (laughs)

Kaeun lived in Japan before and is able to converse in Japanese and also helped to translate and manage the events.

JungAh : Heaven is a song taken from a view of a women while shh is the counterpart for it.

I see, so shh is a song by a man to seduce his woman. What kind of ‘element’ do you think is seductive in men?

JungAh : (Looking around the member). Everyone except Lizzy, we all like gentle approach.

How was the recording?

Raina : It was difficult and we have to match the rhythm of the song especially the ‘shh!,shh!,Shh! part. It was tough and the time goes off faster than expected.

I have listened to the song and I think the Japanese pronunciation is perfect.

Kaeun : We had practiced for 5 days straight.

Really? didn’t sleep at all?

Kaeun : (laughs) No. Practices are hard as we have to dance in suits ( trying to fit the image ) at the same time while singing from far.

Lizzy : I like the oldies style melody, the rhythm is fast as if you’re riding a paper airplane. The feeling is good.

Point of the dance?

Nana : Since the song this time was taken from the male perspective, we wore suits and dances cool as we wanted focuses from the audiences.

Did Lizzy cut off her hair just to fit in the mannish concept this time?

Lizzy: Yes, but actually I really wanted to cut my hair. My hair is damaged badly (laughs)

Even JungAh’s hair had become slightly shorter than before?

JungAH : Ah, I didn’t planned at first because , like Lizzy…i have to cut them off as well (laughs)

Point for the costume this time?

Kaeun : We wanted to have this manhood kind of appeal by wearing suits, and ties as well.

What is the main attraction of the PV?

Lizzy : It was very different from before. We shot the PV in monotone and there were lighting and shadows. It was really interesting.

Since the song is named ‘shh’, why not share one of your secret.

Eyoung : Secret, well it was called secret for a reason (laughs)

JungAh : Same here, I’m sorry but I’ll revealed the secret of the members. When the members are sleeping, they always make all these weird faces.

Lizzy : Sometimes, I just can’t control it and burped in front of everyone (all laughs)

Juyeon : There is no such thing as a secret for me.

Nana : Laugh at least once in a week and eat techan harumon

Raina : Secretly cutting nails in the room once a week…sorry.

By the way, Juyeon got a kissing role with BEAST Jun Hyun in the drama Monster’.

Juyeon : It took about 7hours to change the camera and scenes. It was so awkward at first but I was able to do it after a while. The shooting became fun

What is your goal for Japan this year?

Kaeun : I would like to have a concert in Japan

Eyoung : I would like to maybe release a CD in Japan.

JungAh : It has been 3 years for me since After School first debut in Japan, but I wanted to become more and more popular and to have a lot more of fans here.

Raina : I wanna have a tour in this whole country.

Juyeon : I wanna have more activities in Japan in order to make more money (laughs)

Lizzy : For me, to be able to indulge myself more in variety shows and drama.

How about Orange Caramel?

Lizzy : We are scheduled to have a Korean Comeback in February. I’m so ready now.

Raina : The feeling for OC will still be cute and fresh but the rest are secret (laughs)

Message for the fans in the Japan.

All : Everyone, please come to see the launching event for Shh on January 29th. And we’ll be launching the 2nd full album in March. We planned to have more upcoming events in Japan. Love for all!

Thanks for this. It was a cute interview. So OC is coming back February? There have been no official word from Pledis yet so maybe not..Hoping it's true tho, cuz the sooner OC has their comeback, the sooner we can see AS as a whole. 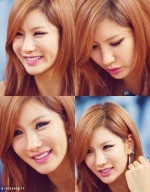 QueenJungah wrote:Thanks for this. It was a cute interview. So OC is coming back February? There have been no official word from Pledis yet so maybe not..Hoping it's true tho, cuz the sooner OC has their comeback, the sooner we can see AS as a whole.

LOL everyone said that they wished to release more albums and become more popular in Japans and Nana just wants to go to the hot springs hahaa so cute.

Hot springs! I can see the appeal.